This page contains the science behind NOVOS. It consists of 5 parts:

1. The scientific rationale behind NOVOS
Our thoughts behind developing science-based longevity nutraceuticals

2. A brief description of the health and longevity effects of NOVOS’ ingredients
Download our little guidebook about our ingredients

3. Selection of representative studies of NOVOS ingredients
Exemplary studies behind each ingredient

1. The scientific rationale behind NOVOS

What is the science behind NOVOS?

And how to find out whether specific ingredients can slow down aging in humans?

It’s nearly impossible to select thousands of people and follow them for 30 to 50 years to see if they live longer to test out a nutraceutical, drug or therapy.

Such a study would take decades and would cost dozens if not hundreds of millions of dollars.

So we have to find other ways to assess whether specific substances can impact lifespan.

Ideally, such substances are selected according to the following principles:

I. They have the ability to impact aging mechanisms (“hallmarks of aging”)

In the last decade, scientists have described various mechanisms that cause us to age. For example, 9 important ones have been described in the “hallmarks of aging” article (R).

These aging mechanisms are epigenetic alterations, loss of proteostasis (protein accumulation inside and outside our cells), cellular senescence, mitochondrial dysfunction, genomic instability, deregulated nutrient sensing, altered intercellular communication (e.g. inflammation/inflammaging), and so on. Learn more about these aging mechanisms here.

Various substances have been identified that can act on these aging mechanisms.

For example, fisetin can clear away senescent cells (R). Lithium and alpha-ketoglutarate have epigenetic effects (R,R,R). Glucosamine can impact mitochondrial health (R,R). And so on.

So a good longevity supplement contains ingredients that act on hallmarks of aging. But they have to do more than that. This brings us to the second requirement.

II. They impact multiple aging mechanisms at the same time

Ideally, each ingredient influences not just one, but multiple aging mechanisms.

For example, glycine has epigenetic effects but can also act as a chaperone, protecting proteins, reducing the risk of protein accumulation (which is one of the reasons why we age).

Glucosamine can improve mitochondrial health by inducing mitochondrial biogenesis (R), but can also induce autophagy (the breakdown of proteins that otherwise would accumulate) (R).

In this way, combining such ingredients enables synergistic effects on the aging process.

III. They have been able to extend lifespan in various animal models, hinting at conserved evolutionary pathways

Ideally, the ingredients extend lifespan not in just one animal model, but in different species, like C. elegans (a little worm often used in aging research), yeast, fruit flies, or mice.

If the compound extends lifespan in various different species, it’s more likely it will also work in humans. Nonetheless, humans are very long-lived species, and often the life-extension effects of specific substances measured in simple organisms are much lower in humans.

Examples of such ingredients are alpha-ketoglutarate (AKG), which extends lifespan in C elegans (R), fruit flies (R,R) and mice (R).

Glycine can extend lifespan in C elegans (R) and fruit flies (R), but also in mice (R) and rats (R).

IV. They are associated with reduced risk of different aging-related diseases, hinting that they act on the underlying aging-process

The root cause of aging-related diseases such as heart disease, osteoporosis and Alzheimer’s is aging itself. Most 20 and 30 year olds don’t get a heart attack or Alzheimer’s.

Aging is by far the biggest risk factor of these diseases.

A substance that can reduce the risk of different diseases of aging simultaneously is likely to act on an underlying mechanism that unites all these diseases, such as aging itself, or at least act on an important aging hallmark that plays a role in multiple aging-related diseases (like protein accumulation or mitochondrial dysfunction).

For example, pterostilbene can reduce the risk of Alzheimer’s (R,R) and diabetes (R), while also improving cardiovascular health (R,R,R) and reducing inflammaging (R,R) and arthritis (R). These are all typical aging diseases and symptoms.

Given that pterostilbene can also extend lifespan in animals (R), it’s likely that this compound acts on aging itself, or at least on one or multiple aging hallmarks.

V. They are associated with reduced risk of mortality in humans

Ideally, studies also show an association between reduced mortality in humans that take the supplement on a regular basis.

For example, studies in the US and Europe have shown that only a very few supplements are associated with a reduced risk of mortality. One of these supplements is glucosamine.

VI. They are recognized as safe by FDA, EFSA and other organizations

If they are recognized as safe by large institutional bodies like the FDA (Food and Drug Administration) and EFSA (European Food Safety Agency), which could be another testimony to their safety.

VII. They are nature-based

Ideally, they are nature-based and have been present alongside human evolution, and not novel man-made, lab-made molecules.

VIII. They are found in the human body, but levels decrease with age

Ideally, the substances are found in our body, and even more ideal, it involves substances of which the levels decline with age. This might hint at their safety, and to the fact that their declining levels could play a role in accelerating (or contributing) to aging.

Examples of molecules that are present at higher levels in young tissues but that decline with aging are alpha-ketoglutarate or glycine.

IX. They have a (very) low side effect profile

The substances are known to cause very little side effects (if any), and no serious side effects, even at greater dosages.

X. They have been used for many decades to treat specific symptoms or diseases in humans without serious side-effects

Ideally, the substances also have already been used for decades or even centuries without serious side-effects or issues. An example is glucosamine, that has been taken for decades to treat joint problems (however, very few people know that glucosamine could also slow down aging (R, R,R,R)).

Alpha-ketoglutarate (AKG) is another example. This substance has been taken for many decades by elite athletes and bodybuilders to improve energy levels without any significant side effects. Alpha-ketoglutarate can also extend lifespan (R,R,R).

In summary, we highlighted some ways that NOVOS uses to identify and select the most interesting and promising substances to slow down aging.

Below you can find a non-exhaustive list of studies regarding such longevity substances.

2. A brief description of the health and longevity effects of NOVOS’ ingredients

You can download a brief description of our ingredients and their health effects below:

Click here or click on the image below to view a table listing many scientific studies for each NOVOS ingredient.

Participants who took NOVOS Core for 6 months all showed improvements in skin firmness as measured by an indentometer.

An indentometer is a device that measures skin suppleness and firmness.

Besides these objective measurements, participants also mentioned noticeable improvements in their skin, such as improved elasticity, smoothness, and firmness.

The study was a small pilot study, done in 4 patients. The device used to test is a state-of-the-art device used for scientific studies. 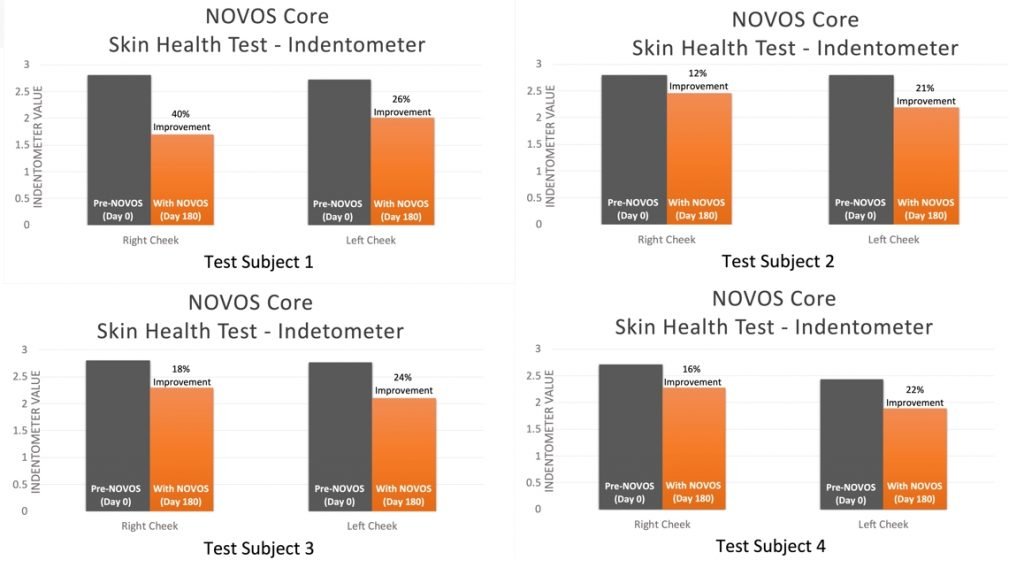 NOVOS is planning to conduct an additional and more extensive dermatological study with more participants.

These results on skin health are not that surprising given NOVOS Core contains various longevity ingredients that are also known to improve skin health, such hyaluronic acid, alpha ketoglutarate, glycine, vitamin C, and glucosamine.

Oral hyaluronic acid improves skin health and reduces wrinkles. Hyaluronic acid is a component of the extracellular matrix, the “glue” that keeps skin cells sticking together.

Glucosamine is a component of the extracellular matrix, and glycine is an important building block of collagen.

These are some examples of how ingredients in NOVOS can improve skin health.

Not just addressing signs of aging, but the underlying causes

What is even more important is that all these ingredients inhibit fundamental aging mechanisms and have shown to extend lifespan in various species.

In other words, NOVOS Core is the only skin supplement that actually addresses the root causes of aging, including skin aging.

A study found that a combination of the 12 ingredients in NOVOS Core and the nicotinamide mononucleotide (NMN) in NOVOS Boost significantly protects cells against DNA damage over a wide dose range.

In the study, HUVEC cells (human umbilical vein endothelial cells) were treated with the 13-ingredient NOVOS formulation and then irradiated. Irradiation typically causes pronounced DNA damage. However, the cells exposed to NOVOS before irradiation had significantly less DNA damage after being exposed to radiation, as measured via 8-hydroxy-2′-deoxyguanosine (8-OHdG or 8-oxodG) levels. 8-OHdG is a measure of oxidative DNA damage. When DNA gets damaged, 8-OHdG is formed.

Treating cells with NOVOS was able to reduce DNA damage as measured by 8-OHdG by up to 77% and on average 68% compared to controls:

Researchers demonstrated that the NOVOS formulation protects against DNA damage over a wide range of doses, an effect mediated by DNA protective effects of multiple NOVOS ingredients at different doses and synergy between ingredients.

This study was conducted at the Ageing Research Laboratories at Newcastle University (UK), specialized in cellular senescence and aging. The study was done under the guidance of Professor Von Zglinicki, Professor for Cell Gerontology.

The study found that the combination of multiple NOVOS ingredients could help the body better deal with senescent cells.

Senescent cells occur during aging and play an important role in the aging process. These cells accumulate various forms of damage, including DNA and epigenetic damage, and secrete substances that harm healthy surrounding cells.

Research has shown that countering senescent cells using senostatic drugs (which suppress senescent cells) can support the body to deal better with aging. In the study, researchers using cell size as marker for the senescent phenotype found that specific NOVOS ingredients had a senostatic effect, while not impacting normal, non-senescent cells:

A senostatic effect comprising a reduction in senescent cell size has also been observed with rapamycin, a prescription drug associated with increased longevity in multiple animal models:

How to Prevent Wrinkles

In a previous blog post, we discussed some reasons why we get wrinkles.  Of course, an important question is: what can we do to slow down skin wrinkling? There are […]

What Are The Best Omega-3 Supplements? A Guide

Omega-3 fatty acids are very important for proper health. They reduce inflammation and are required for optimal immune, heart, eye, and brain health.  That’s why various health organizations, including the […]

Many people are deficient in iodine, often without knowing it.  In fact, if you don’t take high-dose iodine supplements or don’t eat seaweed regularly, it’s very likely you are deficient […]