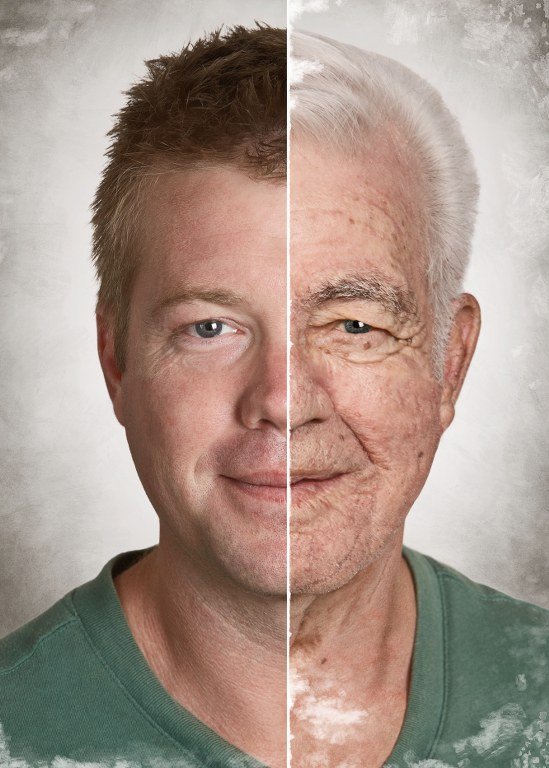 Why are we mortal? What is it about the process of aging that prevents any single body from being able to last forever? And what causes aging in the first place?

In the last 20 years we have learned more about aging than the previous 2000 years combined, and we’re now finally making progress with products and therapies that will slow it down.

It was long believed that we age because of DNA damage. That would make sense, because DNA contains all the instructions to build up our cells and our bodies.

There are also diseases in which DNA repair is impaired, making patients look as if they were aging at an accelerating pace. Examples of such “accelerated aging diseases” are progeria (Huntington-Gilford disease), Werner syndrome, trichothiodystrophy, Rothmund-Thompson syndrome and Cockayne syndrome.

However, these diseases do not mimic the aging process completely. For example, people with progeria do not have many of the very common diseases and symptoms of aging, like Alzheimer’s, cataracts, decline in vision and deafness.

Also, animals with high DNA mutation rates do not age faster, nor do they have reduced lifespans (R). Interestingly, mice with defects in DNA repair do seem to age faster, but this didn’t depend on the rate of DNA mutations (R).

But perhaps the most powerful argument against the role of DNA damage in aging is that it’s possible to clone healthy, young animals from the old cells of old animals. That seems to suggest that the cloning process can reverse damaged, aged DNA.

During cloning, the DNA-containing nucleus is extracted from an aged cell (derived from an aged animal), and put into an egg cell (of which the nucleus has been removed). From that egg cell a new, young animal is born, with in many cases a normal lifespan. So during cloning, the DNA damage that the old animal has accumulated during its lifespan and from which the nucleus is extracted to be put into an egg cell, seems to be suddenly repaired when the animal (and it’s successors) is born.

This does not mean that DNA damage plays no role in aging. It just means that DNA is just one part of why we age, and very likely not even the most important reason. Aging is caused by many other processes. So what are some of these other reasons why we age (and eventually die)?

A decline of the epigenome could be one of the most important reasons why we age.

The epigenome determines which genes are active and which ones are not. You can look at the epigenome as an on-off switch for our genes. When we get older, the epigenome becomes dysregulated: genes that should be switched off are switched on (like cancer-promoting genes), and genes that should be turned on are turned off (like genes that protect and repair our cells). Also, the hugely complex machinery that winds up our DNA becomes less organised, so that the DNA and eventually the entire cell becomes unstable.

Some scientists believe that we mainly age because of epigenetic dysregulation, and not because of DNA damage.

Proteins are the building blocks and workhorses of our cells. A cell contains millions of proteins. These proteins are continuously built up and broken down in a complex and intricate recycling process. However, this process is not perfect. Here and there proteins are not broken down and start to linger around in and around the cells. They also start to clump together. These protein clumps hamper the functioning of the cells. This “protein toxicity” caused by what is also known as a “Loss of Proteostasis”, is one of the reasons why we age.

The mitochondria are the powerhouses of our cell. Each cell can contain hundreds to thousands of mitochondria. Mitochondria produce the energy that we need to live. In fact, the oxygen you breathe and the food you eat are transformed by the mitochondria into the energy you use to move, think and survive.

The older we get, the more the mitochondria become damaged. Without sufficiently functioning power plants, the cells decline, leading to symptoms of aging.

With each cell division, the telomeres become shorter, until they are so short they cannot protect the DNA well enough. In non-dividing cells (in which the telomeres do not become shorter) this is not an issue. Still, these cells can become damaged because the dividing surrounding cells that nourish and protect these cells become damaged because of telomere shortening (e.g. telomeres in dividing glial cells become shorter, impairing the ability of glial cells to support non-dividing neurons in the brain).

Also, during aging, the telomeres become damaged, not just shortened, which further stresses our cells.

When we get older, more and more senescent cells start to appear everywhere in our tissues. Senescent cells are called “zombie cells”: these cells should normally have died but they keep sticking around. Senescent cells are previously healthy cells that have accumulated a lot of damage. Normally, they should kill themselves because of this damage, but they don’t. They keep lingering around, secreting substances that damage the healthy surrounding cells.

In the beginning of this post we discussed that DNA damage is probably not the major driver of aging. This doesn’t mean that DNA damage is not important. For example, double strand DNA breaks do seem to play a role in aging. Other forms of DNA damage can also contribute to the aging process.

However, some scientists speculate that DNA damage can accelerate aging indirectly. To repair a DNA break, specific repair enzymes are lured away from their usual spot, where they normally help to stabilize the epigenome. When a lot of DNA breaks happen, the enzymes cannot maintain the epigenome properly because they have to repair the DNA breaks, which could result in a dysregulated epigenome, an important driver of aging.

Also, our telomeres (the ends of DNA) become shorter in fast-dividing tissues and stem cells, a process that contributes to aging. This telomere shortening and attrition can also be considered as DNA instability or damage.

Additionally, during aging, specific rogue parts of our DNA start to jump around and insert themselves haphazardly into other DNA regions. These roaming pieces of DNA are called retrotransposons, and they also contribute to genomic instability.

A DECLINE IN STEM CELLS

During aging, the amount of stem cells in our body declines. Additionally, the remaining stem cells function less properly. This leads to our tissues being less maintained, repaired and replenished, contributing to aging.

But why do stem cells decline? They do this because of the aforementioned aging mechanisms, such as epigenetic dysregulation, mitochondrial dysfunction, protein accumulation, and crosslinking, which also happen in stem cells. Furthermore, senescent cells popping up everywhere in the body secrete substances that impair the function of stem cells.

During aging, cells also become more numb to specific triggers, like insulin or other nutrients, leading to insulin resistance, a precursor of diabetes, or resulting in aging-switches (like mTOR) that are switched on for too long.

ADVANCED GLYCATION CROSSLINKS (AND OTHER CROSSLINKS)

During aging, crosslinks form between the proteins that make up our tissues. These crosslinks glue proteins together, making our tissues more stiff. Crosslinked and glued-together collagen and elastin in the skin and blood vessels contribute to stiffer blood vessels (and thus hypertension) and wrinkles, for example.

Examples of crosslinks in our body are glucosepane and pentosidine crosslinks.

OTHER REASONS WHY WE AGE

WHAT CAN WE DO ABOUT AGING?

Currently, scientists all over the world are creating powerful new biotechnologies to impact each of these aging mechanisms. They try for example to epigenetically rejuvenate the cells, or revive the mitochondria, or mitigate protein accumulation and DNA damage. In the coming decades we will see fascinating technologies coming about that will impact aging itself.

Why is impacting aging so important? Because one addresses the root cause of all-aging related diseases, like heart disease, Alzheimer’s disease or osteoarthritis.

Slowing down and partially reversing aging will drastically improve the treatments of aging-related diseases, given these aging treatments would treat the underlying cause of these diseases: aging itself.

This is all very fascinating. But the best technology we currently have to slow down aging is… our lifestyle! The longevity biotechnologies we mentioned will take decades to be developed. In the meantime, nutrition, specific supplements, exercise, sleep, and stress reduction are the best methods we have to live longer.

To learn more about how we can slow down aging, both the high-tech way and low-tech way, click here.

If you’d like to learn more about how to take longevity to the next level, check out NOVOS. NOVOS is our over-the-counter nutraceutical that was formulated by esteemed longevity scientists from Harvard, MIT top-tier universities across the world.